WOBURN — A far-left candidate challenging Billerica Republican state Rep. Marc Lombardo has a history of breaking the law, including a past incident in Virginia in which she sideswiped another car in Virginia before bolting from the scene.

Police later caught up with Teresa English at her then-Newport News address in Virginia and served her with a warrant. After her arrest, she was released on $3,000 bail.

English, a Democrat, has yet to disclose the incident to potential voters. 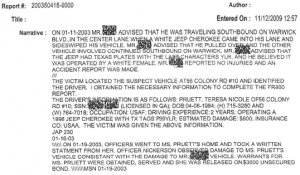 Massachusetts Republican Party Chairman pointed to English’s support for granting illegal immigrants Massachusetts driver’s licenses. She has previously described the MassGOP’s opposition to the new law passed on a party line vote in June as being “racist.”

“This individual supports rewarding those who broke our laws to enter our country with state-issued driver’s licenses and parrots the false claim that this will make our roads safer, so I find it ironic that she could not have cared less about the safety of the victim involved in her own hit-and-run incident,” Lyons said. “I am thankful that this person’s criminal history has been exposed, because voters have a right to know this kind of information.

“Democrats believe they can do anything and not face consequences or accountability, especially here in Massachusetts. Voters should feel fortunate that the truth finally caught up to this individual.”