“An extraordinary woman who lived a life in full. Jeanne will always be remembered.” 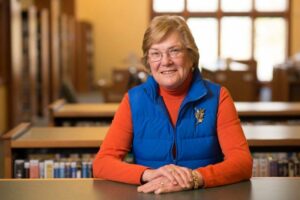 WOBURN — This week, the Massachusetts Republican Party is mourning the passing of one of its most dedicated members in longtime former Vice Chair Jeanne Kangas.

“She was one of a kind,” MassGOP Chairman Jim Lyons said Wednesday. “Jeanne was an athlete, an activist, and was dedicated to promoting the virtues of Republicanism.

“She will be extremely missed, but her legacy will live on. Jeanne was an extraordinary woman who lived a life in full. She will always be remembered.”

Below is a brief op-ed Jeanne submitted to CommonWealth Magazine in 2019, after it first appeared in the MassGOP Spring 2019 newsletter:

Be Republican, don’t be intimidated

Being silent is the route to social, political oblivion

WE REPUBLICANS in Massachusetts often feel the brunt of intimidation from our neighbors, co-workers, and sometimes even family members.

The listener hears us speak approvingly of the Republican Party, of conservatives, or of FOX news; and if we speak of our frustration with the mainstream media or criticize it for being biased and broadcasting its own political views and spinning false news, the listener hears “right wing,” “narrow minded,” or downright “stupid.”

Eyebrows raise, usually before voices, to tell us we’ve uttered a forbidden phrase, committed a social gaff. It’s not unnatural to feel “whoops, I goofed,” that we’ve offended the listener, that we erred. Often that’s enough to quiet us. If we persist, we feel, it could get worse, even heated. So we shut up. We’ve been intimidated and silenced.

Social pressure is omnipresent and daunting to overcome. I’ve met many newcomers to Massachusetts who were registered Republicans in their state of origin, but once here register unenrolled. They accepted the gossip that Massachusetts is a Democrat state (not a democratic one, as that would require transparency—and Massachusetts has earned the title of the least transparent state in the union), and that there are virtually no Republicans here.

The newcomer, like many Massachusetts voters, wants to fit in, to be accepted. The newcomer is intimidated, and doesn’t register as Republican.

Fearing to be socially ostracized, we keep silent. We all want to be accepted, to be popular. However to remain silent is the route to social and political oblivion. So, what to do?

Be Republican. Don’t be intimidated.

Let the listener know that your views are as important to you as theirs may be to them, and that respecting differences is the foundation of free speech and of our democratic Republic.

After all, the Democrats allege that they respect differences, right? Well, you have differences – different views from theirs, and you are glad to share them.

Being a Republican means standing up for your views, your candidates and elected officials, and your party. Most people will respect you for standing up, when you do that respectfully and patiently, even though they disagree. And when you run into someone who is espousing very liberal or far-left views, simply let them know that you disagree but are listening. Then, firmly insist on reciprocity — that the other person listen to you in return.

Jeanne Kangas is the vice chairman of the Massachusetts Republican Party. This essay first appeared in the spring newsletter of the state party.