“The Democrats always point to California as proof that granting driver’s licenses to illegals made that state’s roads safer, but the data obtained through several information requests shows that it did exactly the opposite,” Lyons said.

The information, obtained from the California Office of Traffic Safety, indicates that accidents, hit-and-runs, injuries, and fatalities increased dramatically once the law went into effect in 2015. 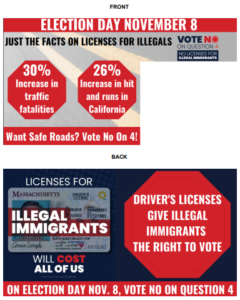 “This is indisputable evidence that offering driver’s licenses to illegals made California’s roads less safe,” Lyons said. “This information should be shared, far-and-wide, with anyone who has fallen for the Democrats’ misinformation campaign claiming that their new law will lead to less accidents on Massachusetts roads.”

“This data, combined with concerns about illegal voting as a result of the Massachusetts Registry of Motor Vehicles’ policy of auto-enrolling anyone who obtains a driver’s license, tells me that this law is nothing but a Democratic Party Trojan horse intended to bring us another step closer to sanctuary state status. If you value the safety of our roads and the integrity of our elections, the only choice is to vote no on question 4.”