WOBURN — Massachusetts Republican Party Chairman Jim Lyons filed a Freedom of Information Act request with Attorney General Maura Healey on Thursday, seeking copies of all correspondence between her office and the law firm that submitted a cease-and-desist demand to a Boston-based first responders organization for sharing a video calling on Healey to address questions about alleged unethical behavior.

“We brought this to the public’s attention because a powerful law firm linked to the State Police Association of Massachusetts tried to infringe on a private citizen’s First Amendment rights,” Lyons said regarding his decision to publicly call on Healey, the Democratic nominee for governor, to address the questions raised in the video. “Once we discovered that the attorney who submitted the cease-and-desist demand previously worked in the AG’s office for more than a decade, we decided to find out whether the order to issue the demand came from the them, and that’s our basis for filing this FOIA request.

“We will continue to pursue the truth, despite the news media’s apparent disinterest in the documented fact that an attorney representing SPAM with close ties to Healey actively sought to use his position to assist with her campaign for governor.”

Lyons is encouraging anyone alarmed by these recent developments to call on members of the news media to begin investigating the relationship between Healey’s office and attorneys representing SPAM.

“All we want is for Massachusetts voters to be armed with the truth before they head to the polls to decide who will become the next governor of the Commonwealth of Massachusetts,” Lyons said. “This matter absolutely warrants media attention and answers from the Democratic candidate for governor.” 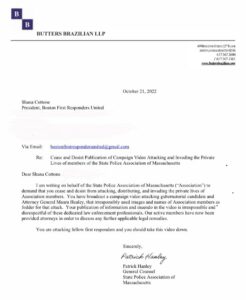 “You have broadcast a campaign video attacking gubernatorial candidate and Attorney General Maura Healey,” the letter states in part.