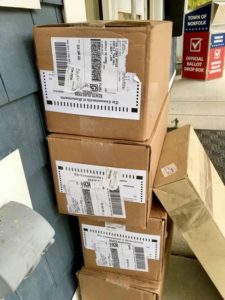 “The Secretary of State’s office has cases of ballots dropped off at random town halls, outside, on a holiday, with a picture of the ballot attached to the box to make sure that anyone who drove by could see exactly what was in these boxes,” Dooley wrote. “How about delivering them on a workday with a signature required?” Over the weekend, Wayland town officials confirmed that absentee voters received ballots marked with the wrong precinct numbers. Meanwhile, state officials confirmed that “hundreds or perhaps even thousands” of voters received mail-in ballots for the November election featuring instructions that falsely inform recipients that their votes are due on Sept. 1, the date of the since-passed primary election. Additionally, voters in Fitchburg’s 3rd Worcester House District have begun to receive ballots where the order of candidates for state representatives unlawfully flip-flopped to benefit the Democrats. According to state election laws, candidates running for an open House seat must be listed by alphabetical order. Fitchburg voters, however, are on track to receive ballots featuring a Democrat at the top, even though Republican candidate Glenn Fossa’s name alphabetically comes before his opponent Michael Kushmarek’s.  Last month, multiple town clerks described the new mail-in voting system as being “ripe for fraud,” citing the Democrat-run state Legislature’s decision last spring to overturn state laws requiring voters seeking mail-in ballots to submit signatures.   “I was horrified to learn yesterday that the new mail-in ballot application system that was authorized by Chapter 115 of the Acts of 2020 and made ‘live’ Wednesday of this week through the Secretary’s office will allow ANYONE to request a ballot without a signature,” Hanover Town Clerk Catherine Harder-Bernier wrote in a Sept. 25 email.  Lyons said all voters, regardless of party affiliation, are encouraged to submit evidence or reports of any suspected fraud to MassGOP’s ballotreport@massgop.com email address.  “Recent alarming developments have prompted us to provide voters with a vehicle with which they can report potential instances of fraud as an alternative to having to navigate the commonwealth’s unending layers of bureaucracy,” Lyons said. “We hope and expect that the 2020 elections are carried out lawfully, with no malfeasance, but to quote the great President Ronald Reagan, it’s on us to ‘trust, but verify.’”