FOR IMMEDIATE RELEASE CONTACT: Evan Lips, communications director617-523-5005 ext. 245 WOBURN — Facebook has apparently caught on to Democratic Rep. David Robertson’s shoddy campaign spending reporting and has put a block on ads promoting the Tewksbury Democrat, a review of Robertson’s online activity shows. “Now it appears Facebook is also having to do OCPF’s (state Office of Campaign and Political Finance) job for them as well,” Massachusetts Republican Party Chairman Jim Lyons said. “The law means nothing to Democrats like Rep. Robertson.” 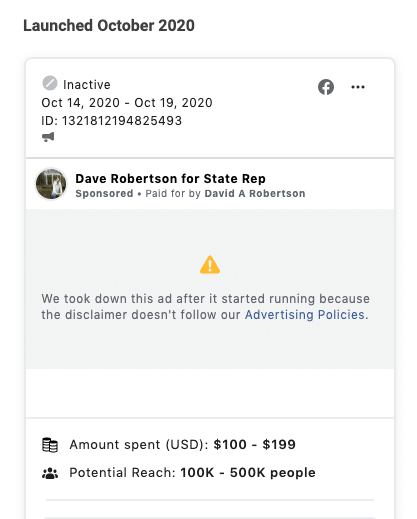 The above screenshot, taken from the Robertson campaign’s Facebook account, shows that the Tewksbury Democrat has been paying for ads without disclaimers, meaning his campaign spending has been unaccounted for. Facebook has built-in mechanisms for preventing candidates from being able to post and boost advertisements without first disclosing the funding source.

In Robertson’s case, Facebook, unlike OCPF, apparently caught on to the lawmaker’s failure to disclose expenditures.

Meanwhile, Robertson’s campaign recently filed a new “external activity report” with OCPF that references the $15,399.05 he has spent during the 2020 cycle as “out-of-pocket candidate expense(s) (as loan(s).”

“If we hadn’t caught on to his scheming, Rep. Robertson would have kept on illegally spending campaign funds without reporting the expenditures to the state,” Lyons said.  “This individual’s shady accounting practices begs the question — how can the public trust Rep. Robertson with their tax dollars when they can’t even trust him to report his own spending?”