WOBURN — The Massachusetts Republican Party is calling on the state Office of Campaign and Political Finance to investigate alleged illegal fundraising involving a Democrat running for state representative out of Agawam.

The candidate, Kerri O’Connor, has been actively soliciting donations via the progressive fundraising arm ActBlue, but has not registered with OCPF and has not opened the required depository account.

“This Democratic candidate probably assumed she’d never have to answer for this kind of serious violation because she’s a Democrat in Massachusetts,” said MassGOP Chairman Jim Lyons. “Here, we have someone who has been actively involved in the Democratic party, who is running for state representative as a Democrat, and who obviously couldn’t care less about playing by the rules we all must play by.”   O’Connor, a Democrat who is running to represent the Third Hampden District and is currently serving her second term on the Agawam School Committee, lists herself on her personal Facebook page as secretary of the Agawam Democratic Party.    “Zero political committee filings, plenty of fundraising activity, and zero attention from our watchdogs in the media,” Lyons said. “It must be nice to be a Radical Democrat in Massachusetts.” 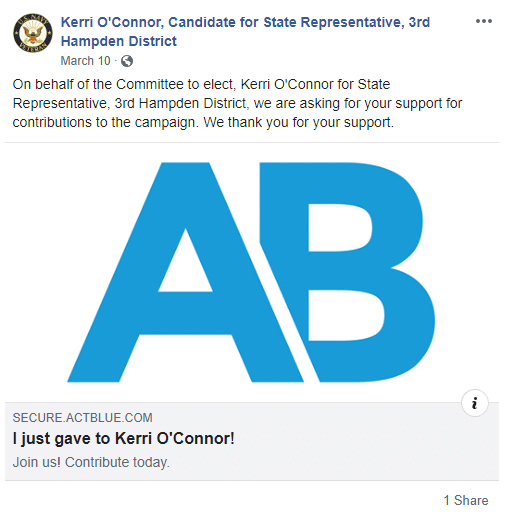