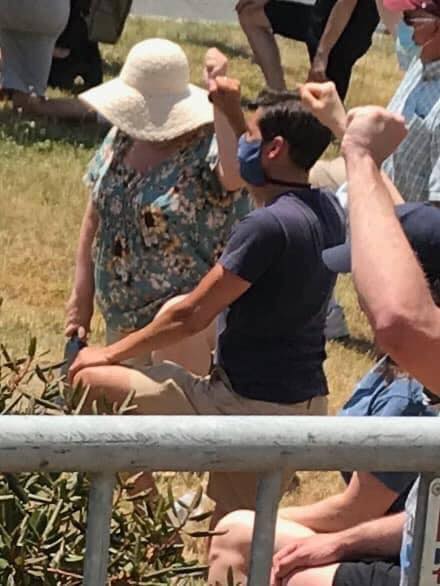 “This individual is absolutely what the Democratic Party has become,” Lyons added about Oliveira. “Their top priority involves pandering to and taking their cues from the same far-left mobs that are rioting, looting, and trying to burn down American cities.”    Meanwhile, earlier this week, Massachusetts Democratic U.S. Sen. Ed Markey issued a formal call to “disarm every police department in America.”   Lyons said it is important for 7th Hampden District voters to know exactly where candidates stand regarding law enforcement.    “We discovered this photo of Chip’s opponent, Democrat Jake Oliveira, pledging his support for the far-left mob just days after the country saw the horrific video of the attempted assasination of two Los Angeles County Sheriff’s deputies,” Lyons said. “Democrats like Mr. Oliveira will never speak out against the violence that has gripped their so-called movement to defund our police departments, but they’ll happily take a knee and raise a fist in solidarity.”   Lyons added that Oliveira’s campaign has yet to respond Harrington’s request last week to hold a series of debates.   “The public deserves an answer as to why Oliveira believes this movement to defund police departments is good for our communities,” said Lyons. “The entire MassGOP ticket stands with law enforcement, and voters should be aware of that fact when they head to the polls in November.”