The video, posted to the group’s Twitter account, identifies three female troopers including one assigned to the AG’s human trafficking unit, and questions whether Healey “used her power” to initiate alleged relationships or if the rumored dalliances were “just coincidences.”

(UPDATE: Boston First Responders United received a cease-and-desist letter from the State Police Association of Massachusetts’s (SPAM) general counsel immediately following the issuance of this press release. You can access it by clicking here.) 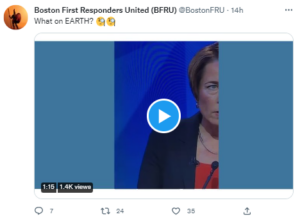 The post also includes a direct quote from Healey during Thursday’s debate in which the gubernatorial candidate states, “people should measure us by our record, by our actions.”

“Voters deserve to know whether the attorney general and Democratic nominee for Massachusetts governor did in fact use her position as the top law enforcement officer in the state to pursue sexual relationships with state troopers serving under her,” Lyons said. “This is a very serious allegation being made by Boston First Responders United, a group that includes individuals with special access to information about the goings-on inside agencies like the State Police.

“As the Democrats’ candidate for governor of the commonwealth, Maura Healey needs to respond to these allegations as soon as possible.”