“The leftists running Beacon Hill are busy cheering lawless legislation that effectively rewards those who broke the law to enter the country with driver’s licenses,” Lyons said. “Meanwhile, families are hurting from inflation, illegal immigration is at an all-time high, opioid-related deaths continue to surge, and there is no relief in sight when it comes to soaring fuel prices.

“This shows just how far out of touch the Democrats are.”

Lyons also noted that Democrats dismissed a series of Republican-backed amendments that would have directed state Registry of Motor Vehicles officials to share citizenship information with town and city clerks tasked with investigating instances of illegal voting.

“That should tell you what the Democrats are all about: Pandering to far-left special interests while workers and families continue to suffer from the effects of the Democrats’ own failed policies,” Lyons said.

The state Senate is expected to vote on the matter later this week.

See how your state representative voted: 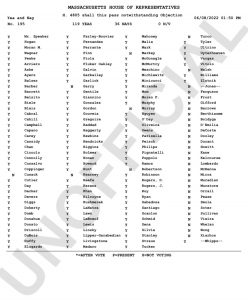