WOBURN — One of new Norfolk County Sheriff Pat McDermott’s recent hires happens to be a former Bridgewater State University professor who made headlines in 2017 after several of his students asked about a series of social media posts he made comparing Republicans to Ku Klux Klan members. 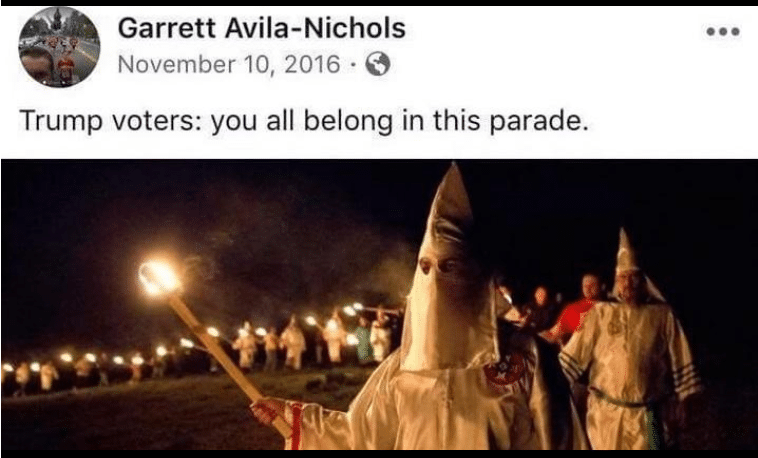 “The truth is that anyone else with a track record of making inflammatory comparisons like this against Democrats would have been disqualified from that job,” Massachusetts Republican Party Jim Lyons said Wednesday. “The double-standard is enraging, and the fact that this individual now has a job in state law enforcement is astonishing.”

State records show Garrett Nichols went from earning $77,376 annually as a rural queer studies professor in BSU’s English Department in January to $82,000 as a public information officer for McDermott, a Democrat.

Nichols, whose published works include Queer Settlers in a One-Room Schoolhouse: A Decolonial Queerscape Pedagogy and Rural Drag: Fashioning Rurality and Privilege, drew media attention over social media posts declaring “F__ Donald Trump” and “F___ ANYONE who voted for Donald Trump.” Nichols’ posts prompted at least one of his female students to speak out, calling them “hate speech towards a certain political group.”

The abstract for Queer Settlers states: “Nichols proposes a decolonial queerscape pedagogy that foregrounds the marginalized and oppressed identities that populate every classroom, while also denaturalizing the supposedly “natural” and “inevitable” rhetorics of heteronormativity, white supremacy, and settler colonization that inform the American academy.”

“Vested with the knowledge of these writings, Sheriff Patrick McDermott hired this individual. This is a very public role in law enforcement being filled by an individual who has a record of making vile attacks on people that love America,” Lyons said. “What’s happening in the Norfolk County Sheriff’s office is happening throughout the country, as more and more conservative voices are silenced, those who disparage people who love America are rewarded.

“People working in the Norfolk County Sheriff’s Department that support Republicans shouldn’t be made to feel like they must now constantly be watching their backs, but that’s exactly the message that this hiring sends.”