“It will pay dividends as we move into November.” – RNC Chairwoman Ronna McDaniel

WOBURN — The Massachusetts Republican Party continues to move forward with its efforts to reform and refocus the organization so that it serves the grassroots, and those efforts are now being recognized at the national level.

Republican National Committeewoman Ronna McDaniel announced recently in a letter to MassGOP Chairman Jim Lyons that the state party has successfully completed its GROW Leaders’ Circle plan, and has “done an outstanding job of enhancing operations and establishing ambitious goals as it builds the road to victory in 2022.”

The RNC’s 2022 GROW (Growing Republican Organizations to Win) Program is aimed at challenging state parties by establishing a series of benchmarks to achieve, such as creating and executing various outreach plans and implementing new digital communication and fundraising strategies. McDaniel congratulated the MassGOP in her announcement for completing the GROW Leaders’ Circle plan.

The MassGOP now moves on to the final stage.

“I want to thank you for your tireless hard work in Massachusetts to improve the State Party and help elect Republicans,” McDaniel wrote. “The time and effort you put into your Leaders’ Circle plan was tremendous, and it will pay dividends as we move forward into November.”

MassGOP Chairman Jim Lyons thanked party staff for their work and said the goal of reconfiguring the state party to serve and prioritize Massachusetts grassroots Republicans ahead of an entrenched establishment is “fully underway.”

He pointed to the six campaign training events that the party has already held in various parts of the state, and the roughly 40 more that are now being planned.

“The energy level at these campaign training events is off the charts and the Massachusetts Republican Party is more than happy to feed off of that energy moving forward in 2022,” Lyons said. “The people that helped us with the ballot initiative signature drives, the volunteers that continue to put in the work, these are the folks that I cannot thank enough.” 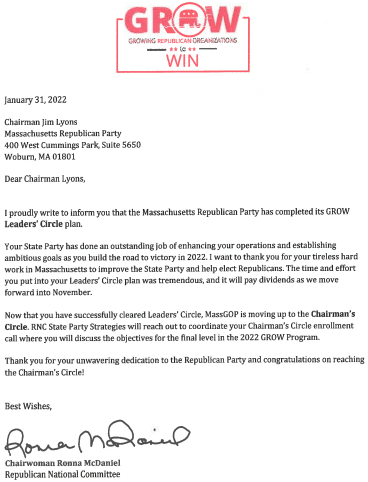