“Yes, America is burning, but that’s how forests grow,” was Healey’s comment to the Greater Boston Chamber of Commerce on June 2, 2020, just days after leftists torched police cruisers, looted businesses and shot at Boston Police officers.

Lyons pointed out that Healey’s response to Keller yesterday was that her comparison was a “poor metaphor.”

“That is a total contradiction of what Maura Healey wanted people to think in 2020 because she was so enamored with her ‘metaphor’ that she directed staff to promote a graphic showcasing her choice of words on social media,” Lyons said. 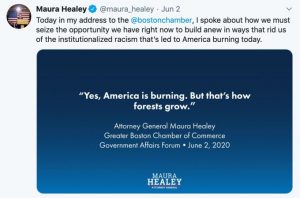 “The fact that Maura Healey was busy proudly promoting this quote herself during the summer of 2020 should tell voters exactly what they need to know in 2022,” Lyons said. “Maura Healey practically spelled it out: the Democrats want to destroy America so they can then rebuild it in their own radical image.

“The Democrats have a monopoly on Beacon Hill and complete control over the federal government, and Massachusetts citizens are shouldering the pain that has directly resulted from the Democrats’ total control.”