WOBURN — Massachusetts Republican Party Chairman Jim Lyons on Wednesday singled out Republican candidate for secretary of state Rayla Campbell and state Sen. Ryan Fattman (R-Webster) for their “tireless” work to bolster signature collection efforts necessary to put a referendum on the ballot this fall that would give voters the final say as to whether illegal immigrants are deserving of driver’s licenses.

“Rayla Campbell has been an unstoppable force in spearheading daily signature drives at locations all across Massachusetts, and recently Sen. Fattman exemplified bold leadership of his own by taking advantage of his role as an elected official to boost organizing efforts,” Lyons said. “Both should be commended, and elected Republicans as well as non-incumbent candidates would be smart to join them in taking the lead on this important issue.” 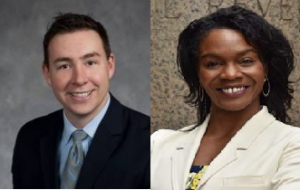 On Tuesday, Fattman issued a press release announcing that he will be hosting online videoconferences every Thursday at 9 p.m. between now and the Aug. 24 signature deadline to help “organize volunteers and discuss upcoming efforts.”

“Statewide, we need to collect over 40,000 signatures, and I have a goal of collecting 5,000 signatures,” Fattman wrote. “This can only be possible with your help.”

Campbell has likewise pledged to collect at least 5,000 signatures.

Fattman said his team will be stationed outside the Walmart Supercenter at 100 Valley Parkway in Northbridge on Thursday from 3 p.m. to 7 p.m. collecting signatures, with plans to return to collect more signatures on Saturday morning beginning at 8:30 a.m. at Northbridge’s 250th anniversary parade.

Polling shows that less than half of all Massachusetts registered voters (40 percent) support rewarding those who entered the country illegally with state-issued driver’s licenses, and before Democrats successfully overturned the governor’s veto of the law last month, all Republicans in both the House and the Senate voted against it.

“It should be up to the voters and not the left-wing special interest groups lobbying Beacon Hill to decide who should be eligible to apply for a Massachusetts driver’s license,” Lyons said. “Our goal is to make sure the people are the ones who get to make that final decision.”