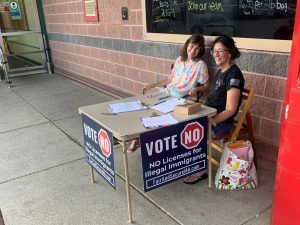 WOBURN — Volunteers collecting signatures in an effort to trigger a referendum that would allow registered voters to decide whether illegal immigrants are deserving of Massachusetts driver’s licenses have already succeeded in triggering something else entirely different.

“What we witnessed over the weekend was a blatant effort by the Radical Left to intimidate and harass people because these elitists don’t want think the voters should be allowed to decide this,” Massachusetts Republican Party Chairman Jim Lyons said Monday. “Leftist mobs are working to cancel our efforts and deny us the right to collect signatures, a violation of state civil rights law, and they’re receiving a boost from prominent elected Democrats.”

According to a legal memo released by Secretary of the Commonwealth William Galvin, “interference or attempted interference with these (petitioner’s) rights by threats, or coercion violates the state civil rights law, which provides for money damages and attorney’s fees.”

“If rewarding illegal immigrants with state-issued driver’s licenses is such a good thing, then what are the Democrats so afraid of?,” Lyons said. “They should want the voters to be able to get to decide.”

In Hudson, Lyons said state Sen. Jamie Eldridge has been a weekend fixture at a table located outside Cabela’s, constantly hovering around volunteers in an effort to interfere with the volunteer signature collection efforts. 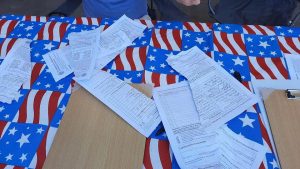 “This is the tolerant left in action,” Murphy said. “They don’t want the people’s voice to be heard.” 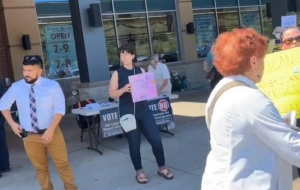 Volunteers said Paz, an SEIU field representative, and others actively worked to block passersby from interacting with volunteers.

At a Market Basket in Tewksbury, leftists employed a similar tactic, effectively forming a barrier in front of a collection table. 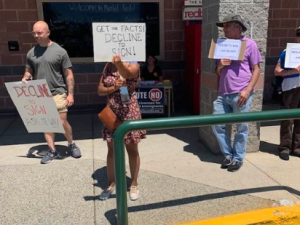 Lyons, who was volunteering at the Tewksbury location with State Committeewoman Evelyn Curley, filed a report with police.

“The Massachusetts Constitution cannot be clearer,” Lyons said. “The interference and harassment our volunteers are experiencing is a direct violation of state civil rights laws.

“Democrats like Sen. Eldridge are aware of this but they have no respect for the rule of law unless it’s something that aligns with their far-left political views, and that’s why their actively encouraging mobs to try and stop us.

“But we will not be intimidated. We will keep on fighting to make sure that this issue will be decided by Massachusetts voters at the polls and not by the far-left special interest mobs trying to silence us.”

Soc Gathering Signatures in Public Places by Evan on Scribd