WOBURN — A federal lawsuit and injunction filed by Republican Congressional candidate Dean Tran claims that Attorney General Maura Healey was motivated by partisan politics when she used her office to file charges against the former Fitchburg state senator.

The lawsuit, filed Wednesday, questions the timing of Healey’s July 1 press release announcing the charges, which weren’t filed until July 11 and stem from an alleged disagreement concerning a lawful firearms sale that occurred three years ago and had previously been investigated. 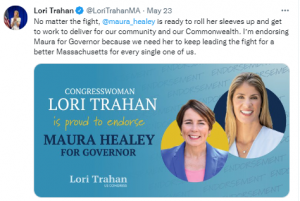 The lawsuit notes that Healey, during her eight years as the top law enforcement officer in Massachusetts, never once prosecuted an elected official, even as her office’s White Collar and Public Integrity Division has consistently been fed evidence of illegal campaign finance activity concerning fellow Democrats like former state representatives David Nangle, Garrett Bradley, and Robert DeLeo, along with former state senators including Brian Joyce and Dianne Wilkerson.

Her involvement in prosecuting Tran, launched at the height of campaign season, marks the first such instance.

“The overwhelming majority of crimes in Massachusetts are prosecuted by the District Attorneys, not the Attorney General who typically only takes high profile or difficult cases requiring the centralized resources of state government. This criminal case is not being brought by the local district attorney, but by Ms. Healey’s office in what is her first prosecution against an elected official.”

An oddly-timed political detail, the lawsuit notes, concerns Fitchburg Democratic City Committee Chairwoman Patricia Vacca Martin who went on a Fitchburg public access channel’s political program a little over a month before Healey’s press release and said a court date for Tran “is coming up shortly.”

The injunction points out that “the leaks in grand jury secrecy, presaging the criminal charges against Mr. Tran, to the Chairwoman of the opposing party’s city committee, and her announcement of them on live television with social media updates, are certainly irregular.”

“The first allegations against Dean Tran were leaked in the middle of his state Senate reelection campaign, and now these allegations are somehow surfacing again now that he’s challenging a vocal supporter of Maura Healey’s in Congresswoman Lori Trahan,” Massachusetts Republican Party Chairman Jim Lyons said Wednesday. “What we have here is a corrupt attorney general who habitually uses her position as the top law enforcement officer in the state for purely political purposes.

“Democrats like Lori Trahan are walking in lockstep with Speaker Nancy Pelosi and the failed presidency of Joe Biden, they know people are hurting, and they know their failed policies mean they’re in big trouble this fall. Maura Healey knows this, and this is why she’s gone out of her way to use her position to try and take out a strong Republican candidate like Dean Tran.

“This is nothing but a politically-driven hit job, and I couldn’t be prouder of Dean for standing up and hitting back.”