FOR IMMEDIATE RELEASE CONTACT: Evan Lips, communications director617-523-5005 ext. 245 BOSTON — Representatives from two Massachusetts ballot committees seeking to guarantee lifesaving medical care for newborns and establish a voter identification requirement submitted paperwork with the office of the attorney general on Friday, marking the official launch of both efforts. Tatyana Semyrog (left), a former candidate for state representative from Duxbury, is the chairwoman of the Committee to Bring Voter ID to Massachusetts. Andover resident Bernadette Lyons (right) is the chairwoman of the Massachusetts Newborn Protection Coalition. “Voter identification laws are something that the overwhelming number of Americans support, yet Massachusetts is one of just 14 states where voters aren’t required to show at least some proof of who they are in order to vote,” Semyrog said. “It should be easy to vote and hard to cheat, and I think this proposal is a commonsense way to ensure election integrity.”  Lyons meanwhile said the other initiative is intended to be a proactive effort dedicated to protecting the lives of all infants born in the commonwealth. “It’s the humane thing to do,” she said. “Guaranteeing that newborns receive lifesaving medical care immediately following birth should be a fundamental right.” 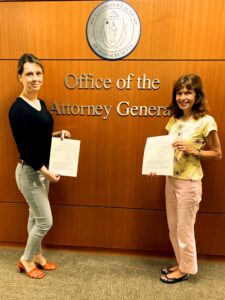