MassGOP Chairman Jim Lyons: “Once again, do not believe a single thing that comes of out this person’s mouth.”

WOBURN — Massachusetts Attorney General Maura Healey is finally addressing her eyebrow-raising metaphor regarding the torching and destruction of American cities leading up to the 2020 presidential election. 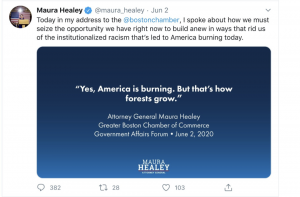 “Yes, America is burning, but that’s how forests grow,” was the infamous turn-of-phrase Healey offered in her prepared remarks to the Boston Chamber of Council in June 2020, following a night of left-wing rioting that left parts of the city smoldering, complete with police cars lit aflame, businesses looted and destroyed, and even multiple gunshots fired at officers, dozens of whom were hospitalized due to injuries.

This week the Democratic candidate for governor was finally called to comment on her choice of words by CommonWealth Magazine.

“You all know me as attorney general and I’m not about an affront to law and order,” she told the publication. “Oh God, that was a big mess. That is not what I meant.” 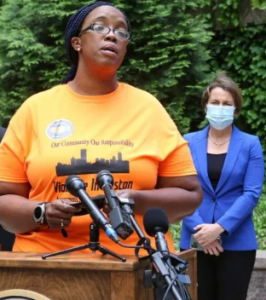 “We know exactly what she meant, because she was so proud of her comparison that she had staff create a graphic promoting her insane comments on social media,” Lyons said. “Democrats like Maura Healey egged on the unlawful destruction of American cities throughout the entire summer of 2020 because they viewed it as politically advantageous during a crucial presidential election year, and that fact is indisputable. The Democrats arranged bail drives for criminals, stood alongside toxic far-left activists like Monica Cannon-Grant, and dedicated more time to inflaming racial tensions and spurring on left-wing mobs than just about anything else.”

“Democrats like Maura Healey, both nationally and here in Massachusetts, will repeat any lie, attempt to deflect any poor choice of words, and tell voters anything, no matter how unbelievable or outlandish, just so they can get increase their positions of power.”

“I’ve said it before, and it deserves to be said again: Voters should not believe a single word that comes out of her mouth.”