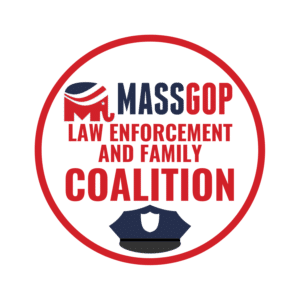 WOBURN — The Massachusetts Republican Party announced on Wednesday the launch of the MassGOP Law Enforcement and Family Coalition, an effort aimed at not only backing men and women serving in law enforcement, but also a project that can provide a grassroots network of support for those considering a run for public office.

The face of the coalition is Joe Abasciano, a law enforcement professional who has proudly worn the badge for 14 years. Abasciano, who helped organize Burlington’s successful “Back the Blue” rally last month, said the coalition’s launch is long overdue.

“Men and women in law enforcement have been at the mercy of pandering career politicians for far too long, and current efforts on Beacon Hill to dismantle laws that protect police officers should concern us all,” Abasciano said. “We’re saying enough is enough.

“We’re launching the MassGOP Law Enforcement and Family Coalition to help keep Massachusetts from drifting further away from law and order, and further putting not just the lives of the commonwealth’s brave police officers, but the law-abiding public, at risk.”

The launch comes days after police in Boston were met by a hostile crowd and a thrown glass bottle while making an arrest in connection with an illegal firearm. Abasciano said these types of incidents are on the rise and are being fueled by partisan demands to “defund police,” in addition to the growing trend of lawmakers demonizing police.

“Legislators are now actively working to strip away laws that protect police in order to score political points and satisfy a vocal minority that continues to demonize men and women serving in law enforcement,” Abasciano said. “The Law Enforcement and Family Coalition was formed in response to these trends, and to provide police officers and their loved ones with a voice and a network of support.”

Abasciano added that the MassGOP Law Enforcement and Family Coalition is already working to organize community standouts across Massachusetts on Friday, Sept. 11, to honor those who made the ultimate sacrifice 19 years ago on 9/11. The standouts will usher in a weekend of “Back the Blue” activism.

Those who register online with the new coalition can expect to receive additional updates on these events and many more. The launch of the MassGOP Law Enforcement and Family Coalition follows the formation of the MassGOP Veterans Coalition, spearheaded by Republican activist and Operation Desert Storm veteran John MacDonald. Like MacDonald, Abasciano also served in the Middle East. Massachusetts Republican Party Chairman Jim Lyons praised the coalition’s launch and said he expects the organization to play a critical role in the party’s advocacy and candidate recruitment efforts. “As the proud son of a police officer, I know what it feels like to have a family member serving in law enforcement and wondering whether or not they will come home safely at the end of a shift,” Lyons said. “I cannot imagine the level of anxiety these brave men and women in blue and their families are experiencing as leftist lawmakers on Beacon Hill not only continue to demonize them but also work to chip away at laws protecting them. “The MassGOP Law Enforcement and Family Coalition will give these courageous police officers and their families a voice and the support needed to preserve law-and-order in the Commonwealth of Massachusetts.”