WOBURN — Attorney General Maura Healey, in an obvious bow to far-left special interest groups, is continuing to serve as an obstacle to signature gathers looking to put recently-passed legislation rewarding illegal immigrants state driver’s licenses before Massachusetts voters this fall in the form of a referendum.

On June 15, the referendum’s supporters filed the necessary paperwork with the Massachusetts Secretary of State’s office, which then promptly advanced the documents to Healey’s office, where it has languished ever since.

On Wednesday, just a half-hour after a Massachusetts Republican Party press release put Healey on notice for stalling the referendum’s advancement, an official from her office submitted a summary to MassGOP Chairman Jim Lyons, who then quickly approved it:

The latest hold-up, however, involves attorneys representing leftist special interest outfits including Field First, which bills itself as a “progressive consulting firm focused on winning elections, passing legislation, and building movements from the bottom up.”

Other parties involved include representatives from the Service Employees International Union and the Brazilian Worker Center.

“Every day that goes by while these delay tactics continue is a day that the referendum’s supporters lose,” Lyons said, citing the 40,000-signature threshold’s Aug. 24 deadline. “Maura Healey is clearly catering to far-left special interest groups and delaying what is a mere legal formality.

“What’s going on here is clearly a political maneuver. It’s a simple ‘yes-or-no’ question, but Maura Healey is doing the bidding on behalf of far-left special interest groups to try and run out the clock, because like them, she somehow thinks illegal immigrants are entitled to Massachusetts driver’s licenses.

“The fact she’s the top law enforcement officer in the commonwealth and supports this lawless policy makes it all the more shameful.” 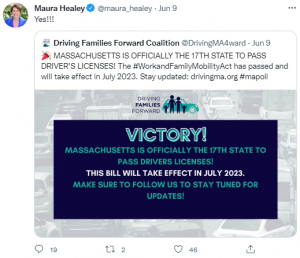